A three-minute brace from Gui Finkler inspired Melbourne Victory to a 2-1 win over Central Coast Mariners as the reigning champions moved top of the Hyundai A-League.

Finkler took the game away from the Mariners with goals in the 16th and 19th minutes on Thursday at AAMI Park, while Matt Sim added a late consolation for the visitors.

For the second week in a row, Victory were without key players – captain Carl Valeri and Besart Berisha were seemingly rested – but Kevin Muscat was still able to find a winning formula.

The Big V made it five consecutive wins in all competitions and still don’t look to have reached top gear, while the Mariners are winless in six games.

“It’s a great game for myself but I think we could’ve kept the ball a bit more especially in the second-half but we got the three points and job done.” – Melbourne Victory’s Gui Finkler

1-0 Finkler (16′) – The Brazilian played a one-two with Oliver Bozanic, who produced a sharp back-heel to release Finkler. From just inside the box, Finkler placed his shot expertly into the bottom corner.

2-0 Finkler (19′) – After Daniel Georgievski won a free-kick 25 yards from goal, Finkler doubled Victory’s lead and his personal tally for the game. The 30-year-old’s wonderful dead-ball effort curled around the wall and inside Paul Izzo’s left-hand post.

2-1 Sim (89′) – For the second-straight week, the versatile midfielder came off the bench to score. His late header from a corner meant little though. 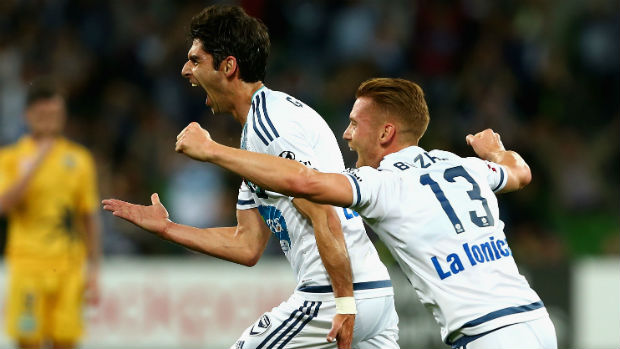 Just a minute after Finkler’s second goal, Georgievski appeared to clip Mariners winger Mitch Austin in the box as he chased the powerful flyer back towards goal.

Referee Ben Williams ignored Austin’s pleas but such contact has led to penalties before.

It was a fortunate let-off for the home side, while Central Coast were denied a chance to get back into the game.

The Mariners have conceded 10 goals in their past five matches.

Victory have won six straight games against the Mariners.

Roy O’Donovan came into the match having conceded 19 fouls – the most in the A-League. The Irish striker added another three at AAMI Park and was lucky not to see red for a stamp on Leigh Broxham in the first half.

We’ve come to expect it from Victory’s Brazilian playmaker but it was fantastic to see Finkler’s dead-ball ability again for the first time this season.

Finkler made his second goal look easy, curling his free-kick into the net as Izzo was left grasping at thin air.

BACK TO THE DRAWING BOARD

If a team plays exciting football but no one’s there to see it are they truly entertaining?

There is no doubt Mariners coach Tony Walmsley has brought much-needed positivity to Central Coast’s play but the club’s focus on entertainment over results will not work if they are so easily beaten.

Apart from their early flurry in either half, the visitors were barely in this contest and Victory cut through the Mariners time and again.

Walmsley must tighten up his defence.

Fans eventually get sick of losing.

Muscat’s men look down on the rest of the A-League – leading Brisbane Roar on goals scored  – heading into the weekend and they still have a game in hand.

Another piece of the puzzle has seemingly fallen into place with Finkler’s performance – the attacking midfielder had not scored this league campaign before last week and now has three goals in two matches.

The Big V don’t play again until November 28 when they host Adelaide United, while Central Coast’s next two matches are at home and Walmsley desperately needs to plug his defensive leaks if they are to get points against Western Sydney Wanderers and Melbourne City.