Melbourne Victory plays its first Hyundai A-League home game of 2019 when it welcomes the Newcastle Jets to AAMI Park on Saturday.

Victory’s nine-match unbeaten run was ended with a 2-0 loss to Adelaide United last time out.

But it gets a quick chance to return to winning ways when it hosts the Jets in Round 13. 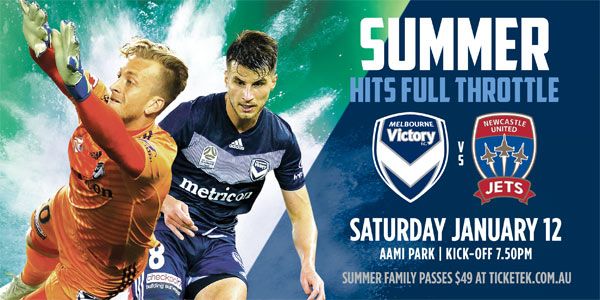 Victory had its chances against the Reds, particularly in the second half, with Terry Antonis going closest when the midfielder hit the crossbar.

But Victory was held goalless in a league game for the first time since April 2018.

Ola Toivonen’s run of having scored or assisted in each of his Hyundai A-League appearances also came to an end.

But the Swedish striker has been in fine form this season, netting seven times and providing two assists.

Keisuke Honda (hamstring), Georg Niedermeier (calf) and Nick Ansell (hamstring) missed the trip to Coopers Stadium and are set to be sidelined again.

Victory has won its past three home meetings against the Jets and enters the round in the second on the table.

Heading into the clash, Newcastle is winless in three matches and sits seventh.

The win over the Jets started Victory’s unbeaten run.

Antonis scored with a superb 20-yard effort and it was all that separated the teams in Newcastle.