Melbourne Victory looks to extend its unbeaten run to four games in the Hyundai A-League when it hosts Sydney FC on Australia Day.

As its busy run of games in January continues, Victory came from behind to draw 3-3 with the Wellington Phoenix in its previous outing.

In its five games of six this month, Victory has claimed three wins to go with a draw and defeat ahead of hosting the Sky Blues. 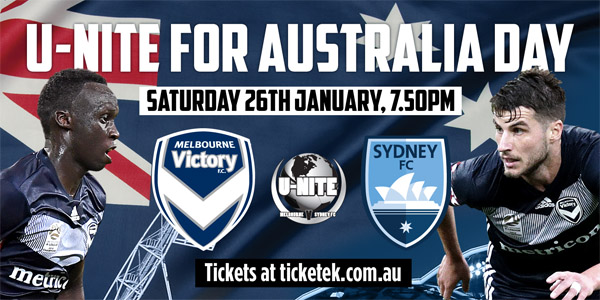 It came from 3-1 down against Wellington, with Ola Toivonen, James Troisi and Kosta Barbarouses on the scoresheet.

Toivonen, 32, is now up to nine goals and three assists in 12 games for the club, continuing his impressive form.

Barbarouses’ goal was his eighth of the campaign, while Troisi netted his third and second in three games.

Victory has scored 10 times in its past three matches as it continues its push near the top of the table.

Ahead of the Round 16 encounter, Victory has won back-to-back games over Sydney.

Victory is third on the table, two points behind Sydney, ahead of the clash.

“I love these games. I love playing against Sydney. They’re always a tough challenge for us. It’s an exciting game for the fans as well and also for ourselves. It’s a big build-up, we all know each other very well, we’ve been playing against each other for a few years now, the majority of us, and you can never quite pick what’s going to happen. It’s always very dramatic the game so, we’re looking forward to the challenge. We’re coming off a lot of games but this is the first full week we’ve had in a while so it’ll be good to refresh the legs and get into the big match against Sydney.” – Victory captain Carl Valeri.

Toivonen and Keisuke Honda were on the scoresheet when Victory overcame the Sky Blues earlier this season.

Adam le Fondre had cancelled out Toivonen’s opener before Honda struck from the penalty spot in the 71st minute.