Melbourne Victory looks to close the gap to Perth Glory when they meet in a blockbuster top-of-the-table Hyundai A-League clash at AAMI Park on Sunday.

Victory has lost just one of its past 15 matches and sits four points behind league leader Perth.

It claimed a come-from-behind 3-2 win over the Central Coast Mariners in Gosford last time out in Round 17.

A James Troisi strike and Ben Kennedy own goal helped draw Victory level against the Mariners before Kosta Barbarouses scored an 88th-minute winner.

Troisi scored and set up Barbarouses, moving onto five goals and seven assists in 16 games this season.

Meanwhile, Barbarouses’ haul of nine goals is bettered only by Swedish striker Ola Toivonen (10) for Victory.

With 39 goals in 17 games, Victory is the top-scoring team in the Hyundai A-League, with Perth (36) second in that category.

Victory plays three of its next four matches at home, beginning with the clash against Perth.

It regained German centre-back Georg Niedermeier from injury last week, the defender coming off the bench against the Mariners.

Perth is unbeaten in eight matches heading into the blockbuster clash at AAMI Park.

“Everyone’s been calm, everyone’s ready and really focused for this big game on Sunday, first against second, and they’re one up on us here so we’ll be looking to get back at them, especially with the home advantage and our crowd will be behind us.” – Victory defender Thomas Deng.

Victory and Perth played out a thriller when they met early in the season.

Goals from Terry Antonis and Storm Roux had cancelled out Glory’s 2-0 lead before Chris Ikonomidis scored a stoppage-time winner. 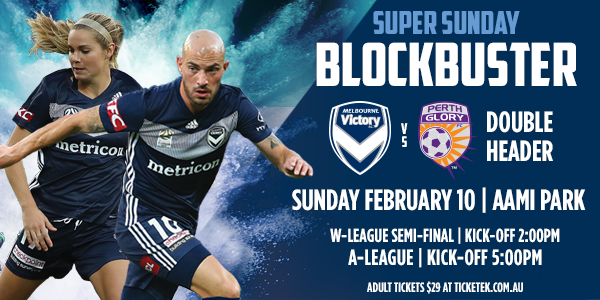