James Troisi says Melbourne Victory must get a result in what shapes as being a tough encounter at Guangzhou Evergrande on Wednesday.

Victory has lost its opening two games in Group F ahead of its clash with the Chinese heavyweight at Tianhe Stadium.

Troisi, who scored when Victory upset Guangzhou in 2014, said his side needed to avoid defeat at the very least.

“Obviously it’s a must-win or some kind of result,” he said.

“We go into every game wanting to win and obviously being away from home in conditions like this it’s going to be very different.

“In our past history we’ve got results against teams like this in Guangzhou themselves although it’s a completely different team.

“We’ll do our research over the next couple of days, get fresh and ready to go for Wednesday night, but, no shying away from it, we definitely need a result.” 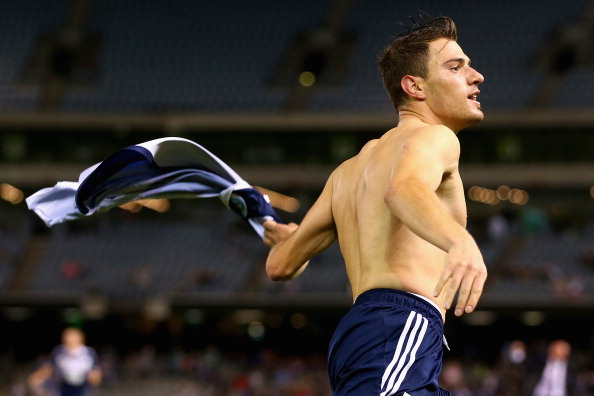 Hot and humid conditions greeted the players on arrival in China, and similar weather is expected on game day.

Troisi, who played 90 minutes in Victory’s narrow loss to Sydney FC on Saturday, said his team could deal with the weather.

“It’s very hot and humid. The humidity is quite difficult and (it’ll) be difficult to play on Wednesday night,” he said.

“But this is something we have to come up against, another obstacle and hurdle we have to overcome and we’ve definitely played in conditions like this before so we just have to get on with it.”

Troisi said he was looking forward to the challenge of facing Guangzhou, which has won its opening four games of the domestic season.

“We’ve got to move on and we’ve got a very important game against Guangzhou on Wednesday night in difficult conditions, but we can’t make any excuses, we just have to get on with it,” he said.

“Obviously they’ve got some very, very good players, some experienced and world-class players we’ll have to come up against but that’s the good thing about coming into games like this and being in a competition like this.

“You get to test yourself out against some of the strongest teams in Asia and it’s something we’re definitely looking forward to coming up against.”