Goals from Besart Berisha, Kosta Barbarouses and Archie Thompson sealed a flattering win for the Big V, who survived a host of missed chances from surprise semi-finalists City.

Both sides were understandably nervous in the opening exchanges but Victory were the first to settle, Berisha taking advantage of some sloppy defending to open the scoring from close range 18 minutes in.

Conceding the opener appeared to sting John van ‘t Schip’s side into action and they began to assert themselves.

However, they couldn’t translate a brief period of sustained pressure into an equaliser and were made to pay when Barbarouses volleyed home a stunning second to put Victory well on top in the 30th minute.

City had several more chances in the second half but simply couldn’t take them as Thompson put the gloss on the win in the final moments to seal Victory’s place in the season decider.

“We’ve been working extremely hard for a long time to be in these big games. Ultimately this is where we wanted to be when we set all our goals in July last year and we’re one game away now.” – Melbourne Victory captain Mark Milligan

“It’s a pretty disappointing end to the season for us. I thought we tried our best tonight, we definitely put a shift in we just didn’t have that killer blow. Victory had the quality when it counted and they made us pay.” – Melbourne City midfielder Eric Paaralu 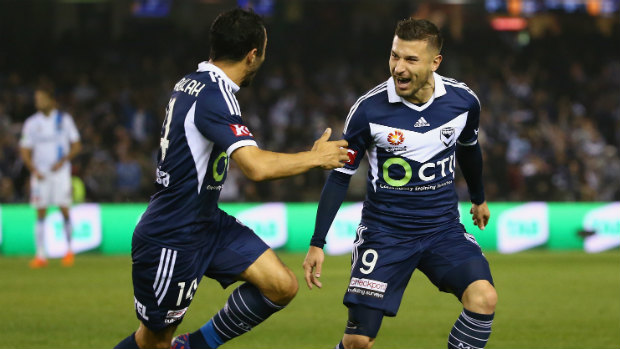 1-0 (Berisha, 18′) Matthieu Delpierre picked up the ball just inside his own half before a sweeping pass found Barbarouses on the right. The Kiwi international held up the ball well before playing in the overlapping Broxham, with his pinpoint cross allowing Besart Berisha to head home unmarked.

2-0 (Barbarouses, 30′) More poor defending proved costly for City as Gui Finkler was allowed to gallop through the heart of the midfield before shifting the ball to Ben Khalfallah. The winger’s cross picked out Barbarouses, who hit a memorable volley into the top right corner to put Victory two goals to the good.

3-0 (Thompson, 87′) Victory’s favourite son Thompson was in the right place at the right time to tap home after Besart Berisha saw his header crash off the post.

Harry Novillo demonstrated his finishing ability during the regular season with a stunning strike against the Phoenix, so when Kew Jaliens’ long throw fell to him early in the second half the whole of Etihad Stadium expected him to find the back of the net.

Instead, the former Lyon man blazed his left-footed volley over the bar when City were in desperate need of a goal to change the game.

Jaliens was in no man’s land at the back post for Berisha’s opener, with his inability to tuck in costing City dearly.

David Williams was forced off in the 39th minute after a tangle with Daniel Georgievski caused the City man to fall awkwardly on his left leg.

The news didn’t get better for City in the second half with Aaron Mooy forced off in the 50th minute with a knee injury. Novillo was then carried off with a hamstring injury just before the hour mark to complete a horror night for the men in white and sky blue.

BACK TO THE DRAWING BOARD

In contrast to their steely performance against Wellington, Van ‘t Schip set his side up to attack from the outset against their crosstown rivals.

While they created several chances, City were left exposed on the counter-attack and simply couldn’t match Victory’s pace.

Victory showed why they finished the season as Premiers with an assured performance against their local rivals.

They defended diligently, attacked with pace and were not overawed by the occasion.

Their reward is a place in their first Hyundai A-League Grand Final in five years, with City left to rue their missed chances.