Melbourne Victory’s 4-1 win over Wellington Phoenix was momentous for more than just the dominant on-field performance.

The match in New Zealand marked the emotional return of captain Carl Valeri, who had been absent since November as he dealt with an inflammatory condition affecting part of his brain.

Valeri’s return inspired Victory to a vintage performance, which included two goals in each half.

Besart Berisha scored in the eighth minute, Oliver Bozanic netted his third goal in two weeks soon after, and Kosta Barbarouses finished a fine attacking move early in the second half.

Young striker George Howard provided the icing on the cake, tapping home his first Hyundai A-League goal after being teed up by Archie Thompson in the 90th minute.

The only negative for Victory was a red card to Berisha for an incident involving Wellington’s Andrew Durante, though his two-week ban was eventually reduced to one by FFA’s independent Disciplinary Committee. 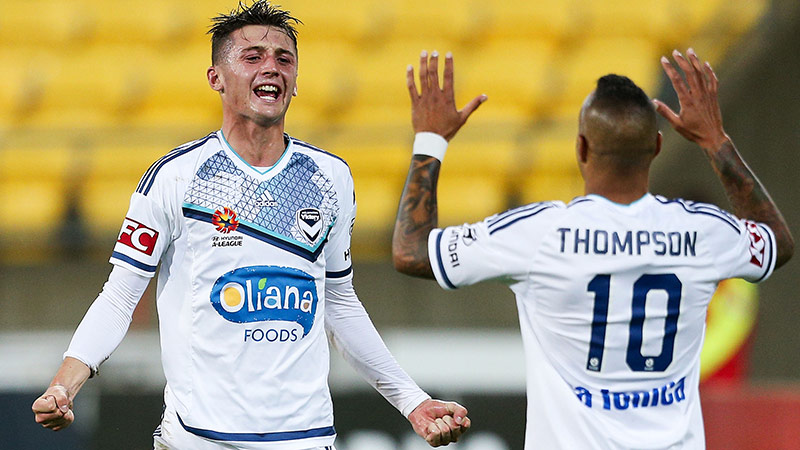 What Kevin Muscat said: “To perform the way we did, I thought was exceptional.

“From a tactical point of view and the way Wellington set up, I thought we pressed them and suffocated them and made them play in their own half, which was creating chances for us.

“I’ve been in the game for as long as I can remember and I’ve never known anything to come upon someone the way it has on Carl.

“He’s the fittest bloke in the country, let alone the team, and (he was) struck down by something that no one could pinpoint.

“Fortunately, two or three weeks ago he came knocking on the door, asking to train.

“We still have to monitor him; he got 25 minutes tonight, which wasn’t the plan, but I’m very happy for him. He’s one of the good guys in the game.”