The pre-season so far

Both sides have played two matches against local NPL outfits for consecutive wins.

Victory’s hit-outs have been against Port Melbourne and Bentleigh Greens, with 3-0 and 5-0 results respectively.

It was the youngsters who were on the scoresheet against Port Melbourne; Callum Goulding, Christian Theoharous and Pierce Waring all scoring.

A week later against Bentleigh Greens it was the returning Kosta Barbarouses who shone. After coming on at half-time for his first pre-season minutes, the Kiwi netted a second half hat-trick to finish off the work started by Besart Berisha and Mitch Austin’s first-half goals.

It was Shannon Brady and Rahmat Akbari on the scoresheet against Lions a fortnight ago, while Roar was forced to come from behind twice against Peninsula on Saturday.

Roar’s newest marquee signing, Massimo Maccarone, scored twice in the last 15 minutes to seal the win. The striker is set to line-up against Victory on Wednesday night.

With 10 FFA Cup goals in 12 appearances, Besart Berisha is the leading scorer in the competition’s history.

It includes a streak of goals in seven consecutive matches across 2015 and 2016. Berisha also found the back of the net in his last outing against Roar; Victory’s 1-0 semi-final win in May. 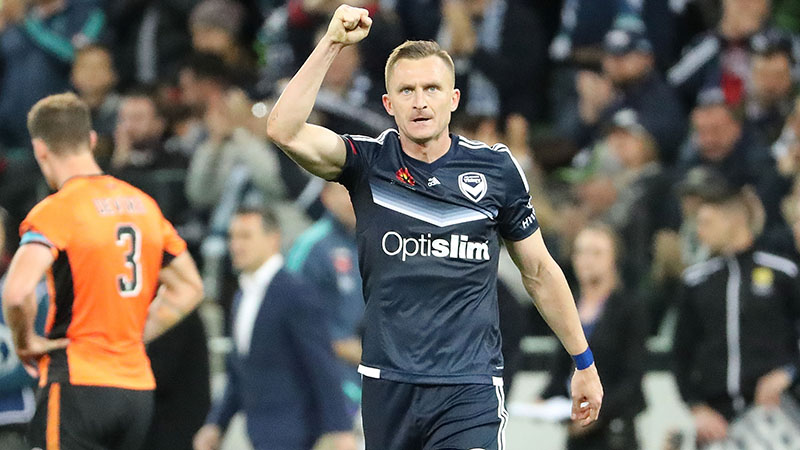 The importance of FFA Cup

Kevin Muscat was keen to highlight the importance of Wednesday night’s clash to his side.

“We place a high importance on the game, without doubt. Having said that we’ll work backwards from trying to win the game. No risks will be taken with anyone but it’s a competition we want to stay in.

“They’re (Victory’s new signings) available and we’ll pick a side accordingly, because it’s important. We’ve all fallen in love with the competition.”

Roar will face A-League opposition for the third consecutive year in the Round of 32. It succumbed to Western Sydney Wanderers 2-0 in 2015, and Perth Glory by the same score line in 2016.