Thomas Deng can thank a decisive move from Africa and the close bond he shares with his family for the footballer and man he has become.

Deng, 19, was born in the Kenyan capital of Nairobi. He lived there until he was six, before his family made the decision to relocate permanently to Australia.

His mum, dad, older brothers and older sister landed in Adelaide, where they stayed for 10 years before moving to Victoria at the end of 2011.

“I was quite young when we moved to Australia, so I don’t really remember much from when we were back home,” said Deng.

“But it was a good move for the family. We came to a safer place with good education and work.”

In Africa, Deng started playing football with his siblings as a bit of fun.

In Australia, he watched big brother Peter play until he eventually followed in his footsteps by joining Adelaide Blue Eagles Football Club.

“My older brother was the person who really drove me to play at a young age. I’ve been doing it since I was about seven years old,” Deng says.

“My first soccer club in Australia was in Adelaide and I started playing there in the under-8s, which was pretty fun. Everyone gets to play, it was just a kick around.” 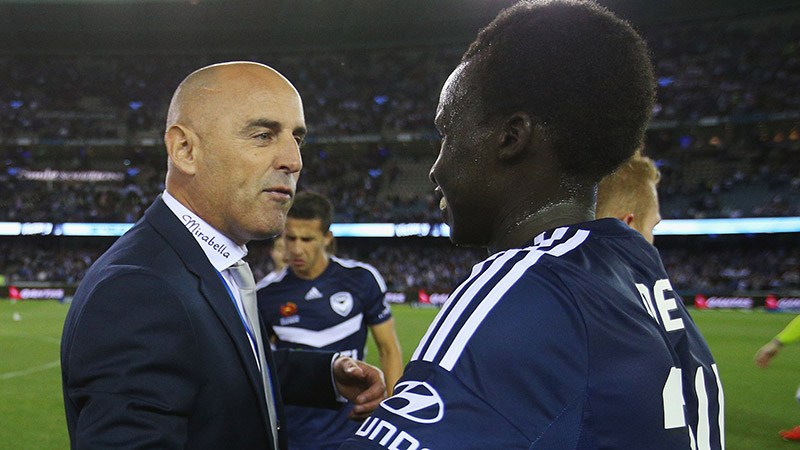 Away from football, Deng enjoys spending his free time reading up on other players and coaches and learning about their stories.

“I like to read books and biographies by others who play the game and by the coaches,” Deng says.

“It lets me see everything through a different point of view and learn about all kinds of different people.”

If he wasn’t playing football, Deng would be studying to become a personal trainer.

“Before I signed, I was enrolled at university to study in a personal training course because my brother just finished his,” Deng says.

Looking back now, Deng is happy that he pursued career in football.

Deng’s Hyundai A-League debut was a baptism of fire, starting alongside Matthieu Delpierre in defence for the Round 2 Melbourne Derby in 2015/16.

“Before that game was probably the most nerve-racking situation I’ve ever been in. Playing in front of 40,000 people at such a young age is a big deal,” Deng said.

“Kevin Muscat gave me some good advice though, he said, ‘Just do what you have to do and your teammates will back you up, don’t worry about the nerves and you’ll be fine’.

“I still get nervous now, but they’re a different type of nerves. They’re more controlled.”

Favourite movie: That’s a tough question! I like action movies – Training Day with Denzel Washington is probably one of my favourites, he’s one of my favourite actors. I also like Scarface. I used to watch the cartoon series of Spiderman when I was younger but I lost interest as I got older.

Secret talents: I like my dancing. Hip-hop is my favourite. I’m pretty good at that.

Most embarrassing moment: When I first started at Victory I was at training and I slipped over the ball. All the boys laughed at me, which wouldn’t be bad now, but I had come in new and didn’t know the players very well.  If it happened now I wouldn’t mind because I’ve gotten to know the players quite well.

Favourite travel destination: I’ve never been there but I want to go to Hawaii one day. I’ve heard it’s a nice place and looks amazing.

Cats or dogs? I don’t like cats. I’m hoping to get a dog soon, something big like a rottweiler or a German shepherd.

Something you can’t live without: Probably my phone and the internet. It’s bad, but I feel disconnected without them.

Top three artists: I like J. Cole, Kanye and Kendrick Lamar, but I didn’t get to see them when they came to Melbourne because I had training.