Melbourne Victory begins its Hyundai A-League title defence with a Derby clash against City at Marvel Stadium on Saturday.

Victory enters the 2018/19 campaign on the back of a record fourth championship secured in May, but with a much-changed squad.

Victory hosts City looking to make a bright start to its season, having won just two of its previous 13 Round 1 matches (eight draws, three losses).

However, it has won the past two derbies and four of the previous five. 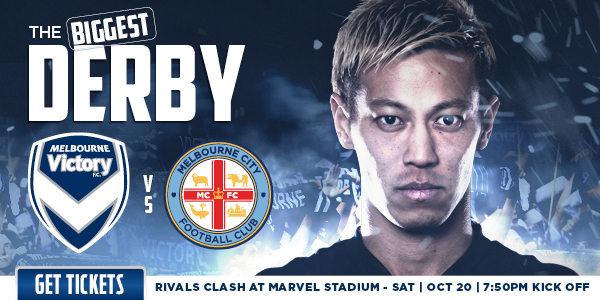 “Obviously after moving to a new country, it’s very busy. I have been busy since I came here, but I have been comfortable because the people are helping me and I’m getting to know the players day by day. I think we have prepared well.” – Victory star Honda.

“We’re excited, we’re excited for the season to start, not just because it’s a Derby but because it’s been a long pre-season so the boys have been chomping at the bit to get the season started and we’ve got one week of preparation in front of us now and on Saturday it’s go time.” – City defender Ritchie De Laet.

Victory claimed the final derby of last season with a hard-fought win at AAMI Park.

Kosta Barbarouses’ opener was cancelled out by a Bruno Fornaroli penalty, but Leroy George scored a 62nd-minute winner.