Melbourne Victory begins its Hyundai A-League campaign with a derby clash against City at Marvel Stadium on Saturday.

After producing some fine results in pre-season friendlies, a revamped Victory begins its league season under Marco Kurz.

Including the arrival of Kurz, Victory has gone through off-season changes, including making several signings. 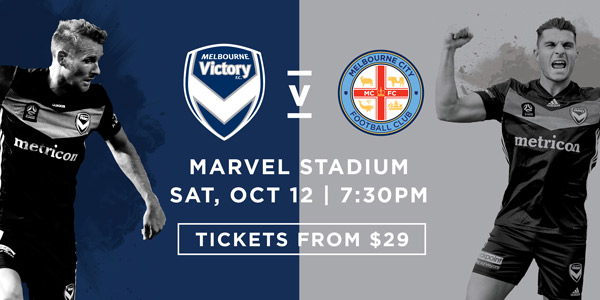 Ola Toivonen, named captain this season after an excellent first campaign with Victory, has starred, having scored 15 league goals in 2018/19.

Victory is in competitive action for the first time since August, when it suffered an extra-time loss to the Newcastle Jets in the FFA Cup.

It has won 12 of the previous 28 Hyundai A-League derbies against City, drawing seven and losing nine.

“Since the Newcastle game, we’ve picked it up every week, we’ve taken it to a new level and I don’t think we’ve lost since the FFA Cup game which is always good, you need that confidence going into the first round, especially in a derby game. It’s important to have that momentum and I feel like we’ve gained a lot of it in pre-season so it’s good.” – Victory attacker Nabbout.

Reduced to 10 men after Georg Niedermeier’s 15th-minute red card, Victory battled hard to a draw in the final derby of last season.