Melbourne Victory continues its busy January with a blockbuster clash against Wellington Phoenix at AAMI Park on Sunday.

Victory recorded its third win in four games in 11 days with a 5-0 thrashing of Brisbane Roar at Suncorp Stadium.

Kosta Barbarouses was the star with his first Hyundai A-League hat-trick – including his 50th goal in the competition – on Tuesday.

But Victory’s busy run of games continues when it welcomes fifth-placed Wellington to Melbourne. 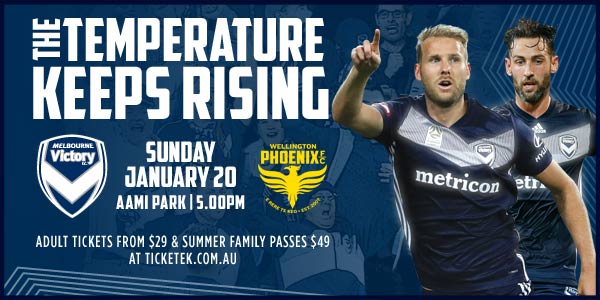 Victory was ruthless in Brisbane, with Ola Toivonen and Storm Roux joining Barbarouses on the scoresheet, while James Troisi provided two assists.

Strike duo Toivonen (eight) and Barbarouses (seven) have led Victory on the goalscoring front so far this season.

Meanwhile, star midfielders Terry Antonis and Troisi each have four assists, running the show behind the front pair.

However, Victory also ended a run of six games without a clean sheet with a solid display defensively against Brisbane.

Victory has two home games to finish January, a month in which it plays six games, and has so far collected nine points of a possible 12.

Wellington is unbeaten in its past eight games and is pushing for a top-four spot.

“Wellington’s on a good roll at the moment. They’re one of the in-form teams of the competition so we need to be wary, we need to recover well these next few days and we’ve got to be prepared for them to come and throw everything at us.” – Victory forward Barbarouses.

Victory and Wellington played out an entertaining draw less than a month ago.

David Williams’ 62nd-minute opener was cancelled out by Toivonen before Victory pushed late but was unable to find a winner.