Victory 2007: Celebrating the 10th anniversary of our first Championship

Melbourne Victory will celebrate the 10th anniversary of its first Hyundai A-League Championship with an 11-part video series on its website and social media channels.

Victory produced one of the greatest performances in Hyundai A-League history on February 18, 2007, defeating Adelaide United 6-0 in the Grand Final.

A capacity crowd of 55,436 smashed the attendance record for an Australian domestic league match, while Archie Thompson starred on the pitch with an incredible five goals.

Ten years later, head coach Ernie Merrick and the 14 players who featured in the Grand Final have been interviewed for an exclusive documentary special.

The in-house production, simply titled Victory 2007, will premiere on Monday, February 20, with two episodes posted online per day until Friday.

The final episode will be posted online on Saturday, February 25 – just hours before Victory’s Hyundai A-League clash with Adelaide at AAMI Park.

Outtakes and previously unseen footage will also be available to view for free on the club’s dedicated Victory 2007 mini-site at melbournevictory.com.au/victory2007.

Join the conversation and share your favourite memories of Victory’s 2007 Championship by using the hashtag #Victory2007 on social media.

Episode 1 – The Season That Was – Monday, February 20, 1.00pm AEDT
Under the guidance of head coach Ernie Merrick, Victory rose from seventh out of eight teams in season one of the Hyundai A-League to one of the most dominant sides Australian football had ever seen in season two.

Episode 2 – Robbo’s Header – Monday, February 20, 8.00pm AEDT
With Grand Final hosting rights on the line, Victory rallied from a goal down in the Major Semi Final to beat Adelaide in the most dramatic of circumstances, an unheralded hero scoring the late winner.

Episode 3 – More Than an Extra Man – Tuesday, February 21, 1.00pm AEDT
Victory was the talk of the town as 55,436 fans filled Telstra Dome for the Grand Final, smashing the previous attendance record for an Australian domestic league match, on an incredible night for football in this country.

Episode 6 – My Name is Fred – Wednesday, February 22, 8.00pm AEDT
Brazilian midfielder Fred joined Victory for season two of the Hyundai A-League and made an immediate impact, culminating with his devastating performance in the Grand Final.

Episode 7 – A True Leader – Thursday, February 23, 1.00pm AEDT
Kevin Muscat’s move from defence to midfield proved pivotal in the 2006/07 season, while the skipper’s influence off the pitch played just as a big a role in Victory’s rise up the ladder.

Episode 8 – Six Touches, Five Goals – Thursday, February 23, 8.00pm AEDT
Archie Thompson entered Hyundai A-League folklore with his five goals in the 2007 Grand Final, a record that may never be broken. Together with his partner in crime, Danny Allsopp, they formed a lethal partnership up front.

Episode 9 – Icing on the Cake – Friday, February 24, 1.00pm AEDT
In any other Grand Final, his goal would have been one for the ages. Coming off the bench for Archie Thompson, Kristian Sarkies scored Victory’s sixth and final goal in the 2007 Grand Final, and made headlines around the world for what happened after the final whistle.

Episode 10 – Victory is Ours – Friday, February 24, 8.00pm AEDT
It was Victory by name and nature as Ernie Merrick’s men tasted the ultimate success, with captain Kevin Muscat hoisting the Championship trophy high into the night’s sky to chorus of cheers from the Victory faithful.

Episode 11 – Let the Party Begin – Saturday, February 25, 1.00pm AEDT
Melbourne had never seen anything like it. From champagne showers in the dressing room, to the sheer pandemonium of the Royal Melbourne Hotel, Federation Square and everything in between, Victory well and truly celebrated its first title in style.

Melbourne Victory would like to thank Fox Sports, Channel 7, Channel 9, Channel 10, SBS, 1116 SEN, the Herald Sun, Tom Via II at Bethlehem Steel FC and the video team at Philadelphia Union for their help and assistance, as well as Ernie Merrick and the 14 players who made this video series possible. 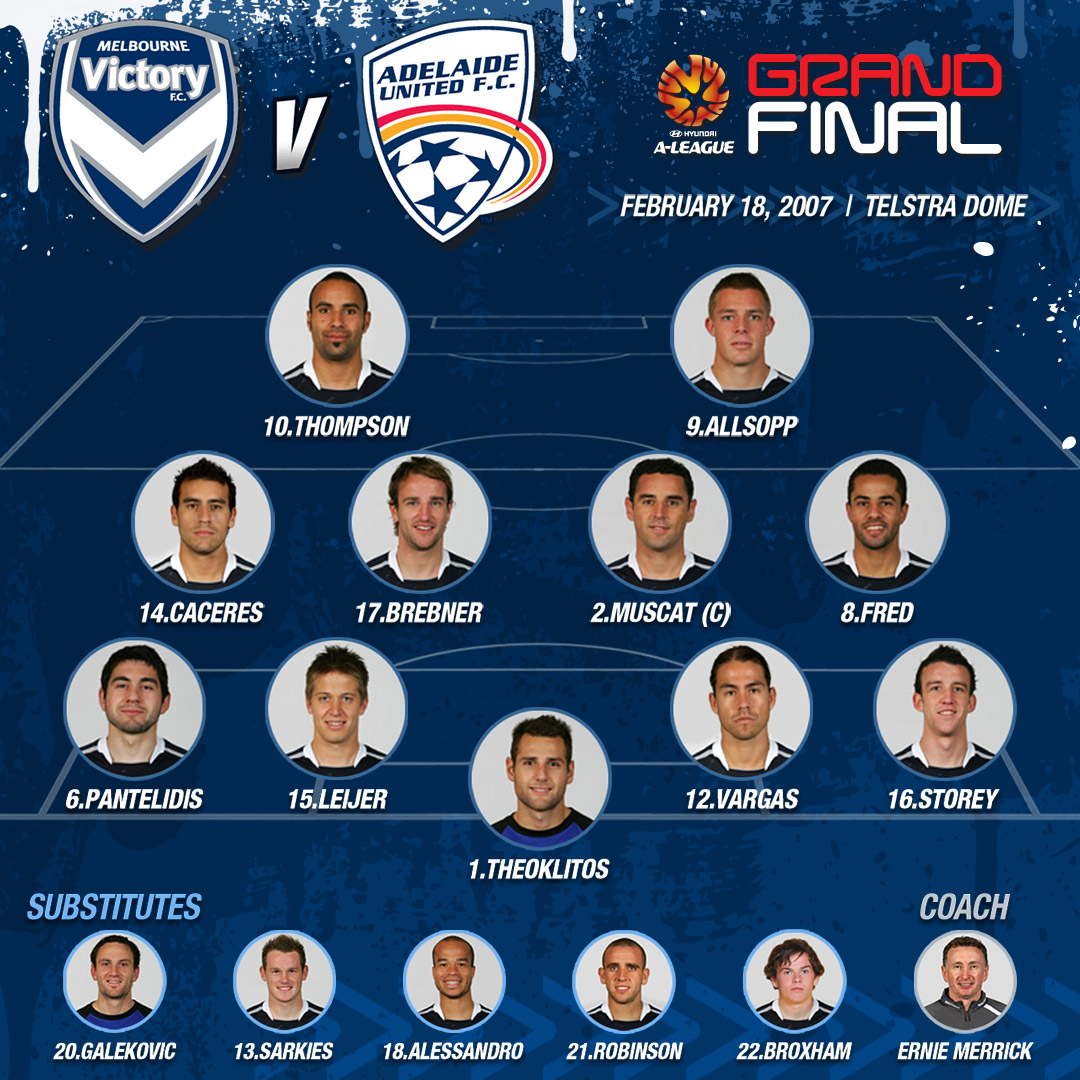