Besart Berisha has continued his penchant for the big occasion, scoring a late winner to give Melbourne Victory a 3-2 win over Melbourne City in the first derby of the season on Saturday night.

Goals from Victory’s Fahid Ben Khalfalla and Kosta Barbarouses were cancelled out by fine finishes from City’s Bruno Fornaroli and Stefan Mauk in a three minute second-half burst to set up a grandstand finish in front of 40,217 fans at Etihad Stadium.

Both sides had several chances to grab a winner in a frenetic end to the game, with Berisha adding to his derby goal tally in the 90th minute to stun City fans after some smart substitutions from coach John van’t Schip orchestrated a comeback.

Michael Zullo made his first appearance for Melbourne City, while 18-year-old Thomas Deng made his starting debut, replacing the suspended Leigh Broxham in Victory’s central defence.

Carl Valeri wore Victory’s armband for the first time and goalkeeper Danny Vukovic broke the league appearance record but as so often has been the case in recent Melbourne derbies Berisha put his name up in lights.

“I know when I work hard and keep believing I will score my goal and it was a very important goal.”

“City came really strong in the second half. We made a couple of mistakes, we should definitely do better. It should never happen to us after being 2-0 up.

“It’s a derby, anything can happen. Credit to City for their fight but I’m really happy in the end that we scored  the goal.” –  Victory striker Besart Berisha told Fox Sports

“Especially in the second half there were periods where we  were on top. It’s just disappointing to cop a goal in the last couple of minutes, Etihad (Stadium) is not a good place for us at the moment.” –  City captain Patrick Kisnorbo told Fox Sports

1 – 0 Fahid Ben Khalfallah (23’) – Besart Berisha received the ball with his back to goal and played a pass across the 18-yard box that was latched onto by Ben Khalfalla. The midfielder’s shot took a wicked deflection off Paulo Retre, leaving Sorenson stranded as the ball bounced into the net at the Bourke Street end. 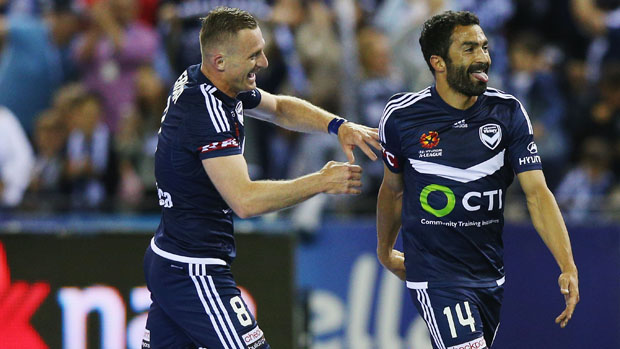 2-0 Kosta Barbarouses (57’) – Ben Fahid Ben Khalfalla was given too much space on the edge of the box floating in a cross to the back stick. Barbarouses showed good strength to win the header, beating Sorensen at his near post from inside the six-yard box.

2-1 Bruno Fornaroli (68’) – Defender Patrick Kisnorbo went on a foray forward, finding himself on the ball at the top of the box. The skipper played a neat pass to the feet of Fornaroli who spun around his defender with a deft touch and poked the ball home.

2-2 Stefan Mauk (71’) Victory’s defence switched off in midfield with Aaron Mooy switching play with a pin-point long ball to Mauk. The midfield substitute powered onto the pass, taking a touch before threading the ball through Danny Vukovic.

3-2 Besart Berisha (90’) Substitute Connor Pain went on a darting run down the flank, whipping in a dangerous ball across the face of goal. Sorensen could only parry away the danger with the ball falling kindly to Berisha who was able to roll it into an empty net.

The home team has taken out the last six Melbourne derbies, with City’s record at Etihad Stadium now just one win from nine games.

Besart Berisha’s goal stretched his run of scoring in home derbies to four games, netting six goals in the process.

With the match barely 90 seconds old Besart Berisha was played through on goal with a defence splitting pass. Goalkeeper Thomas Sorensen was swiftly off his line, smothering Berisha’s shot with his body from outside the box to defuse the danger. It was a vintage overall performance from the Dane, highlighted by the fact it’s rare for a goalkeeper on the losing side to be named man of the match.

With City still down a goal and needing some inspiration Socceroo Aaron Mooy produced a world-class ball to pick out Mauk, which got his side back in the game. Unfortunately it proved to be in vein. 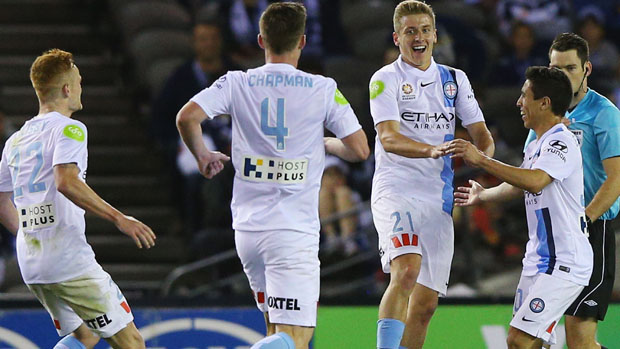 After a nervous opening half the game lit up after the break. The match seemed to have an inevitability about the result when Victory went two goals up but City showed a fighting spirit that was missing from this fixture last season. They’ll be bitterly disappointed to come away empty handed but can take solace from the fact they pushed the reigning Champions till the death on their home patch.