Melbourne Victory remain on track to complete a remarkable domestic treble in 2015 after seeing off a brave Hume City 3-0 in their Westfield FFA Cup semi-final on Wednesday night.

Besart Berisha’s first-half penalty and late goals from Kosta Barbarouses and Jason Geria put the gloss on the final score but the PS4 NPL Victorian club were outstanding throughout in front of more than 6000 fans at AAMI Park.

Hume had a number of bright moments and went close to getting a goal on a couple of occasions but Victory’s class shone through in the end.

Having already claimed the Hyundai A-League championship and Premiers’ Plate in 2015, Victory will now look to add the FFA Cup to their trophy cabinet in next month’s decider.

Kevin Muscat’s side will host Perth Glory in the final, which will be played at AAMI Park on Saturday, November 7.

Berisha’s goal continues his run of scoring in every round this year, while he now has seven goals in the Cup to be the competition’s all-time leading scorer alongside Glory’s Nebojsa Marinkovic and Adelaide’s Sergio Cirio. 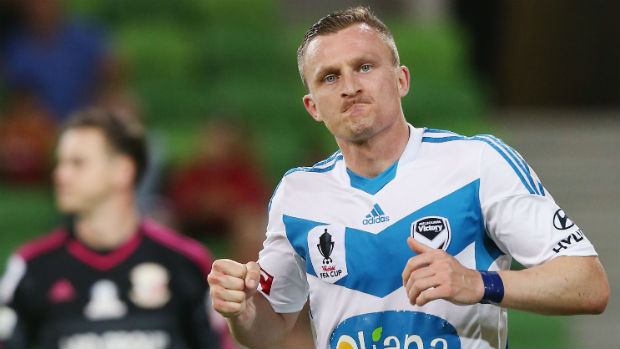 The part-timers from Broadmeadows made an encouraging start, snapping into a few tackles and taking the game to Victory.

And they were a little unlucky not to have received a penalty inside six minutes when Theo Markelis’ cross into the box appeared to strike Geria’s arm but referee Ben Williams waved it away.

It took 15 minutes for Victory to get into their stride and pressure Hume’s goal.

Youngster Jesse Makarounas was the main threat and on in the space of 10 minutes he had three shots from distance which were on target only to be denied on each occasion by Chris Oldfield with superb saves.

While Victory was enjoying large chunks of possession, Hume were holding firm defensively but their resolve was broken five minutes before the break.

A sweeping Victory attack saw Kosta Barbarouses get down the right and cross for Berisha who was pulled down in the box by Bradley Walker for a penalty.

The Albanian picked himself up and coolly sent the excellent Oldfield the wrong way to give the A-League side the lead at half-time.

Jai Ingham’s dangerous cross was almost turned into his own net by Victory defender Matthieu Delpierre three minutes after the resumption as Hume sent a reminder they weren’t out of the contest.

Out of season for more than five weeks you would have forgiven the NPL club for tiring as the match went on but they continued to trouble Victory.

Substitute Souheil Azagane was introduced soon after for Hume and he had a glorious chance to equalise midway through the second half. 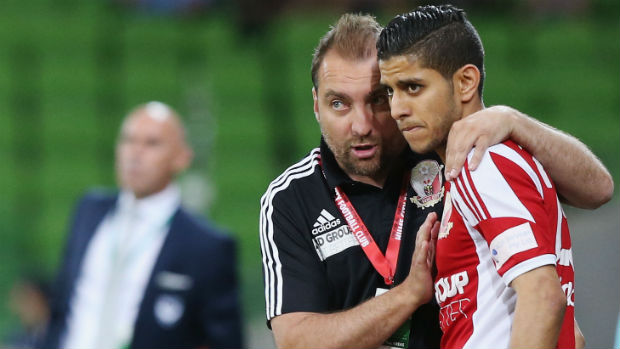 He skipped past former Swansea player Giancarlo Gallifuoco to be clean through towards goal but his well-hit shot was pawed away by Danny Vukovic.

Victory then made the result safe in the final minute as Barbarouses fired into the bottom corner, before Geria rounded off the scoring in stoppage time to make it 3-0.