Melbourne Victory has a short turnaround ahead of its trip to face Brisbane Roar in the Westfield W-League on Thursday.

Victory’s premiership defence started with a 3-0 loss to Sydney FC on Sunday, and it must back up with a trip to Dolphin Stadium.

Despite the defeat in Sydney, Victory had its moments at Jubilee Stadium, where it fell 2-0 behind in the opening 22 minutes.

However, it was unable to find a way back into the contest before the Sky Blues sealed their win in additional time. 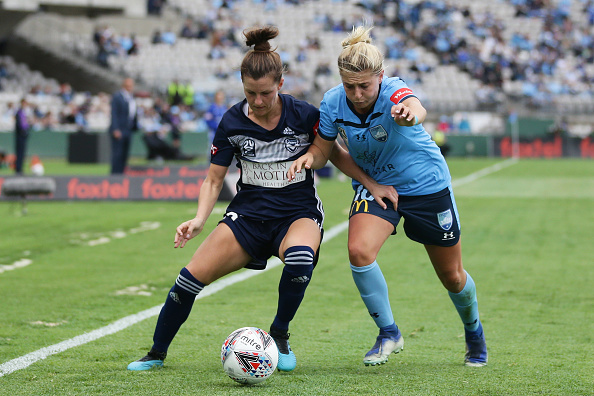 Longo, Doran and Robers were introduced off the bench, while McCormick, Menges, Hanson and Jenkins started for Victory.

Victory has lost its past two trips to Brisbane by a goal, while a Dowie hat-trick inspired a 4-1 win away to Roar in 2017.

on the short turnaround…
“It’s tough with the result on the weekend, you obviously want to try and put a few things right, but it’s all about recovery in these short turnarounds and then obviously off to Korea on Saturday (for the AFC Women’s Club Championship). We did a little session this morning (Tuesday), yesterday we had recovery at AAMI Park and we had a meeting about the game, really good positive meeting as well about things we need to do a little bit better going into the game on Thursday. We don’t have time to do too much so we’ll do a few tactical things tomorrow (Wednesday) and then we’ll head up to Brisbane and most probably the stuff that we can’t cover on the field we’ll do on the whiteboard and through video. I’m confident we’ll get a really good reaction from the girls, they’ve turned up really well, really positive today so I’ve got a good feeling for the game on Thursday.”

better for the run against Sydney…
“I think the cohesion of the team obviously gets better game by game, but I think when we look back, we didn’t have a good enough test in pre-season. We had good quality games, but in terms of intensity and intensity for long periods, we didn’t really get that in pre-season. I think it just kind of surprised us a little bit. It shouldn’t have done, but it did. Playing the game, being in that game, it’s woken us up now, we realise it’s a very short season and we need to be better in a number of departments and if we are, we’ll be more than competitive.”

main focuses…
“I think the start of the game, we can’t afford to have the lack of pressure that we put on Sydney which led to us losing 50-50s and the duels all over the field. Every single player was down on 50-50s and duels, lost out over the game. Also, just the quality of our basic skills, it was just in that first half, in that first 25-30 minutes was just not of the standard that we’re used to and we all know we can do so much better and that was the disappointing thing. We’ve spoken about a few things that we need to bring every week, every single game that we play before we look at anything else so they’re a couple of the things and there’s one or two others, but as I say, I’m really confident we’ll come out and put in a really good top-quality performance on Thursday and we’ll see where that takes us.”

Brisbane edged a thriller at home when the teams met last season.

Christine Nairn cancelled out Allira Toby’s opener before own goals from Casey Dumont and Dowie put Roar in control.

Dowie pulled a goal back for Victory before a Yuki Nagasato strike for the host, and Emily Gielnik’s stoppage-time effort proved to be a consolation as Roar’s Katrina Gorry saw red late on.